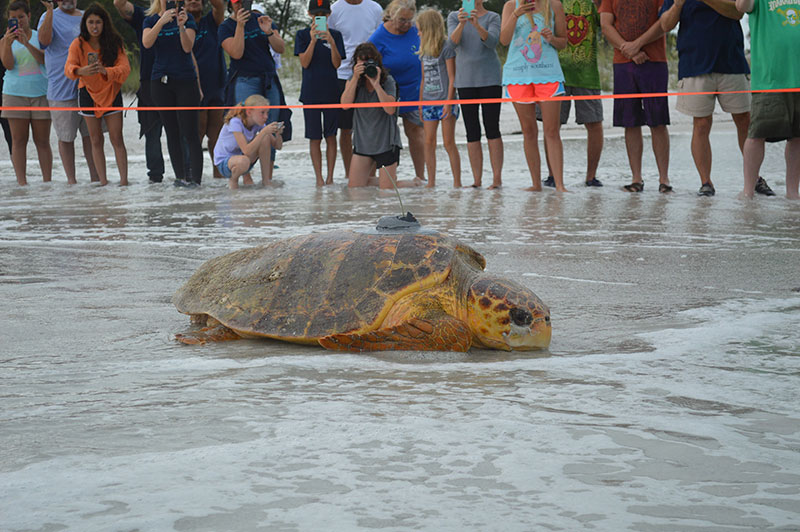 It may not have been the fastest race in history, but Anna Maria Island won the marathon with loggerhead Eliza Ann.

Anna Maria Island Turtle Watch and Shorebird Monitoring and the Sea Turtle Conservancy placed a tracking device on a sea turtle June 19 after it nested at Coquina Beach in Bradenton Beach, then released the turtle to the Gulf of Mexico early June 20. That tracker showed the path taken by the sea turtle as she nested twice more and journeyed on her three-month migration.

This was the first confirmation of multiple nesting by a mature female loggerhead on the island.

As part of the tour, 20 sea turtles were tagged and released from beaches in Costa Rica, Panama, Nevis and Florida. The turtles then competed in a “marathon,” a competition for which turtle swims the most miles during the three-month “race.”

Pictured Above – Eliza Ann traveled 1,693 miles to win first place in the marathon, which tracked distance covered through Nov. 1 by the tagged sea turtles. The runner-up, a loggerhead named Cruz, traveled 1,583 miles after it was tagged July 29 near the Disney Vero Beach Resort, south of the Archie Carr National Wildlife Refuge in Melbourne Beach.

The migration was tracked using satellite telemetry. Every time Eliza Ann raised her head above water, the antenna on her tracker sent a signal, letting conservancy research scientists know her location.

Following nesting, the tracker showed the turtle traveled to the Bahamas to forage and, as of Nov. 1, was in the water north of Cuba.

Additionally, the data received from the turtles’ transmitters allowed researchers to determine the number of dives taken during a 24-hour period, the duration of the most recent dive, and the water temperature of the location, according to Lexie Beach, Sea Turtle Conservancy communications coordinator.

Following nesting and placement of a satellite tracking device atop her carapace June 20, Eliza Ann, a 300-pound-plus loggerhead, crawls back to the Gulf of Mexico. The device, placed by Anna Maria Island Turtle Watch and the Sea Turtle Conservancy, tracked Eliza Ann’s travels for the Tour de Turtles — a marathon for sea turtles. See page 26 for more. Islander Photo: ChrisAnn Silver Esformes

“To adequately protect sea turtles in all their habitats, we must learn more about their migratory patterns, their behavior at sea, where their marine habitats are located, how the turtles use these different habitats and the migration routes turtles travel between habitats,” Beach said.

Since the tour is over, this data becomes available to researchers around the world and also is being used as part of Sea Turtle Conservancy research scientist Dan Evans’ doctoral thesis.

Turtle watch participated in the tour in 2015 with a loggerhead named Amie, but the turtle’s satellite tag fell off shortly after the race began and it was disqualified.

– Article Courtesy of The Islander

Things to do this Winter on AMI

Hi, I am Dan.  If you are anything like me, once you visit Anna Maria Island, you won’t want to leave.

I have been enjoying Anna Maria Island with my family and hosting guests for a decade.  I am excited to share my slice of paradise with you!