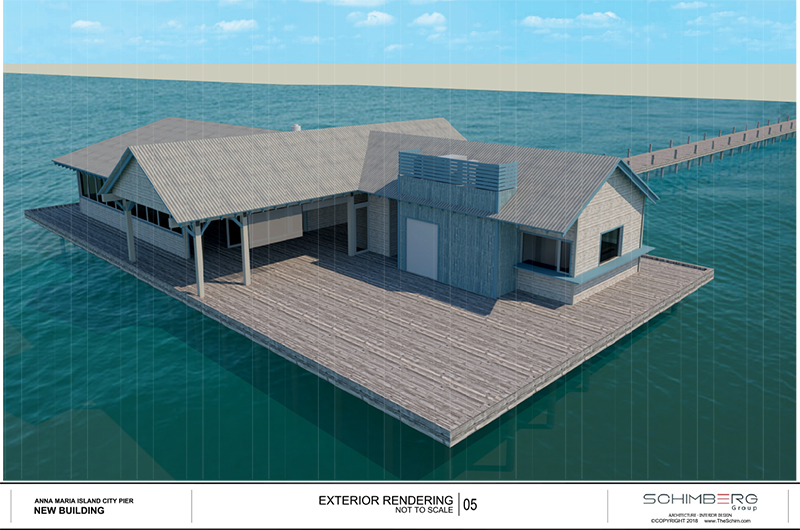 Guests who enjoy Dan’s Florida Condos, which is located on Anna Maria Island, FL will be very happy to hear the progress on the repairs in place for the historic Anna Maria Island City Pier!  Work on the Anna Maria City Pier should begin in May.

In a commission meeting April 3, Jay Saxena, vice president of Ayres Associates, the engineering firm in charge of rebuilding the pier, delivered details of a timeline for the project.The planks should be removed on or about May 15.  The timeline anticipates demolition to begin in early May and to be complete by early September.

Ayres received its demolition permit from the U.S. Army Corps of Engineers March 7 and expects to receive a construction permit by July 31. Work on the platform is expected to begin in late August and work on the restaurant is set to begin in April 2019.

A seagrass study requested by the National Oceanic and Atmospheric Administration is set to start at the beginning of May, and is required before construction. Saxena said NOAA is working with Ayres to move the date to May 11 instead of June, when it would normally be scheduled, to coincide with the season for seagrasses to be most fully in bloom.

The firm has yet to set dates for when it will order and receive materials for construction.  All work should be completed by December 2019, according to Ayres.

Commissioner Brian Seymour asked Saxena April 3 how sure he was the pier could go back up if they tore it down.

“There’s no reason they wouldn’t let us do it,” Saxena said, pointing out the existing pier poses a public safety hazard.

Saxena said the Army Corps is thankful that the city is going through the permitting process to repair the pier, noting that the pier had previously been constructed and repaired without permits or studies.

“We would really have to do some toe dancing with the Army Corps to be able to keep it,” Mayor Dan Murphy said.

In a split vote, Anna Maria commissioners decided April 3 to proceed with Kebony for the future siding on the buildings at the T-end of the city pier. Kebony is created with pine and modified to perform like mahogany or teak, tropical hardwoods that last longer.

The commission voted in March to use Kebony for the pier’s decking as well. The material comes with a 30-year warranty.

Jay Saxena of Ayres Associates, the engineering firm contracted to design and build the pier, and Barron Schimberg of the architectural firm, Schimberg Group, presented Kebony and other options April 3 in a meeting to finish selections for the building.

Other options cost less than Kebony.

However, Commissioner Doug Copeland said he did not think cypress or cedar would be as durable as HardiePlank. He said he built window shutters for his home 20 years ago with cypress select and HardiePlank.

“The (HardiePlank) board looks like the day I put it up,” Copeland said.

He also brought a sample of decayed cypress from his shutters. Most of the cypress he used is still in good shape, he said, but some is rotting.

He advocated for the use of HardiePlank, pointing out it is cheaper than Kebony and still provides durability.

Schimberg said the aesthetics of HardiePlank will be “flatter” and resemble concrete.

Selecting siding for the restaurant and bait buildings was the final decision for the city commission to make on construction materials, Saxena said. Mayor Dan Murphy asked commissioners if they wanted to add railings to the design. “People seem to be divided on it,” he said.

Sissy Quinn, a resident of Anna Maria and head of a preservation group, said she preferred no railing, adding most people would feel it would less resemble the old pier. Commissioners voted 5-0 against railing, but asked Murphy to look into raising the curb — toe boards on the edge of the walkway and T-end.

Some changes were made to the floor plan to accommodate requests by pier tenant Mario Schoenfelder, Schimberg said.

In a March meeting, Schimberg proposed opening up the restaurant by installing sliding-glass doors and windows along the back wall, so the restaurant could be opened for a breeze.

However, Schimberg said Schoenfelder retained only a sliding-glass door on the inside wall, for servers to go in and out.

He also requested clear plastic curtains along the edge of the roofing that could be dropped during inclement weather so customers could remain seated outside.

The bait shop would be redesigned to include sliding-glass windows, as well as boundaries redrawn to provide more storage space.

The kitchen also would be expanded for more prep space.

Schimberg said he was meeting with Schoenfelder April 9 to go over more design options, including altering the ceiling to improve acoustics.

AMI in running for Happiest Seaside Town in USA