Many past guests of Dans Florida Condos have inquired about the Anna Maria City Pier, which suffered season ending closure due to last years hurricane season. We are happy to announce things are starting to move forward! Rod and Reel pier will soon have her sister back and functioning, now that decking material has been selected and models are being finalized. 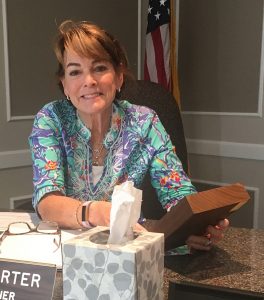 Anna Maria Commissioner Carol Carter holds a sample of Kebony, an enhanced wood product, chosen March 6 for the decking in the rebuild of the city pier.

Another step is concreted for the future Anna Maria City Pier.

After weighing their options, Anna Maria commissioners directed Ayres Associates, the firm hired to engineer and carry out rebuilding the Anna Maria City Pier, to use Kebony as the decking material.

Touted as a sustainable alternative to hardwood, Kebony is created with pine and modified to perform like mahogany or teak, longer-lasting tropical hardwoods.

Commissioners voted 4-1 for Kebony after failing to take up a motion from Commissioner Brian Seymour to select IPE, a Brazilian hardwood that costs $3.91 per linear foot.

Azek, a material made of a plastic composite, was rejected because it would retain heat, making it a hazard for barefoot visitors.

Commissioners voted to select spun-concrete for the piling material at a Feb. 14 meeting with Ayres Associates.

The pier will look “pretty much the same,” said Barron Schimberg, owner of the Sarasota-based Schimberg Group, the architectural firm selected by Ayres to design the new pier.

A model of the city pier design by Schimberg Group depicts the proposed addition of extended roofing and a trellis facing Tampa Bay at the T-end of the Anna Maria City Pier. Islander Graphic: Courtesy Schimberg Group

Schimberg presented commissioners March 6 with floor plans, models and renderings of the redesign, highlighting what has changed and what has stayed the same.

The most notable differences would be a change to the shape of the roof, the layout of the bathrooms and the addition of a trellis at the back of the restaurant.

Schimberg proposed extending the portion of the roof connecting the bait shop to the restaurant over the walkway to the front and back of the pier.

He also proposed relocating the pier bathrooms to make them more accessible at the back of the pier.

In addition, Schimberg proposed the trellis to resemble scattered fishing poles. The trellis would provide partial shade for the area behind the bait shop.

Other proposed changes include adding sliding-glass doors to the restaurant, moving the garbage containers to the east side of the pier and removing a door from the bait shop.

Schimberg said sliding-glass doors at the side and back of the restaurant would open up the space, allow air to flow and enable waiters to serve outside customers more readily. Other changes would clean up the facade, he said.

Although Schimberg’s model included solar panels, he said that would need to be arranged between the tenant and the city, not the architect.

Woodland told Schimberg after his presentation: “There’s one thing you can’t do with architecture and design and that’s called character…. You can’t build character, that comes with time.”

Woodland told Schimberg he would continue to vote “no” throughout the process, as he now has his mind set on repairing the pier.

During public comments, Anna Maria resident Dennis Ellsworth expressed concern that the model appeared to show the majority of the T-end of the pier as a restaurant.

Schimberg said the design was not set, and the tables were only included in the model for illustrative purposes. He also noted the area around the perimeter of the building for fishing is unchanged.

Mike Deal, a regular at the pier before it was closed in September, also commented on the amount of dining tables in the design. He said 30-40 people would congregate in the open area of the pier deck and adding chairs and tables would take that space away.

The bait shop served beverages on the open deck and often a musician entertained there.

Deal added that he approved of the trellis to create plenty of shade.

Murphy said commissioners should come back with comments on the design at the next meeting with Ayres Associates.

In addition, the mayor said he would attempt to arrange a meeting with pier tenant Mario Schoenfelder, who he expects to be visiting Anna Maria from his home in Germany through May.

The next meeting with Ayres will take place in the next three weeks, Murphy said.

AMI in running for Happiest Seaside Town in USA